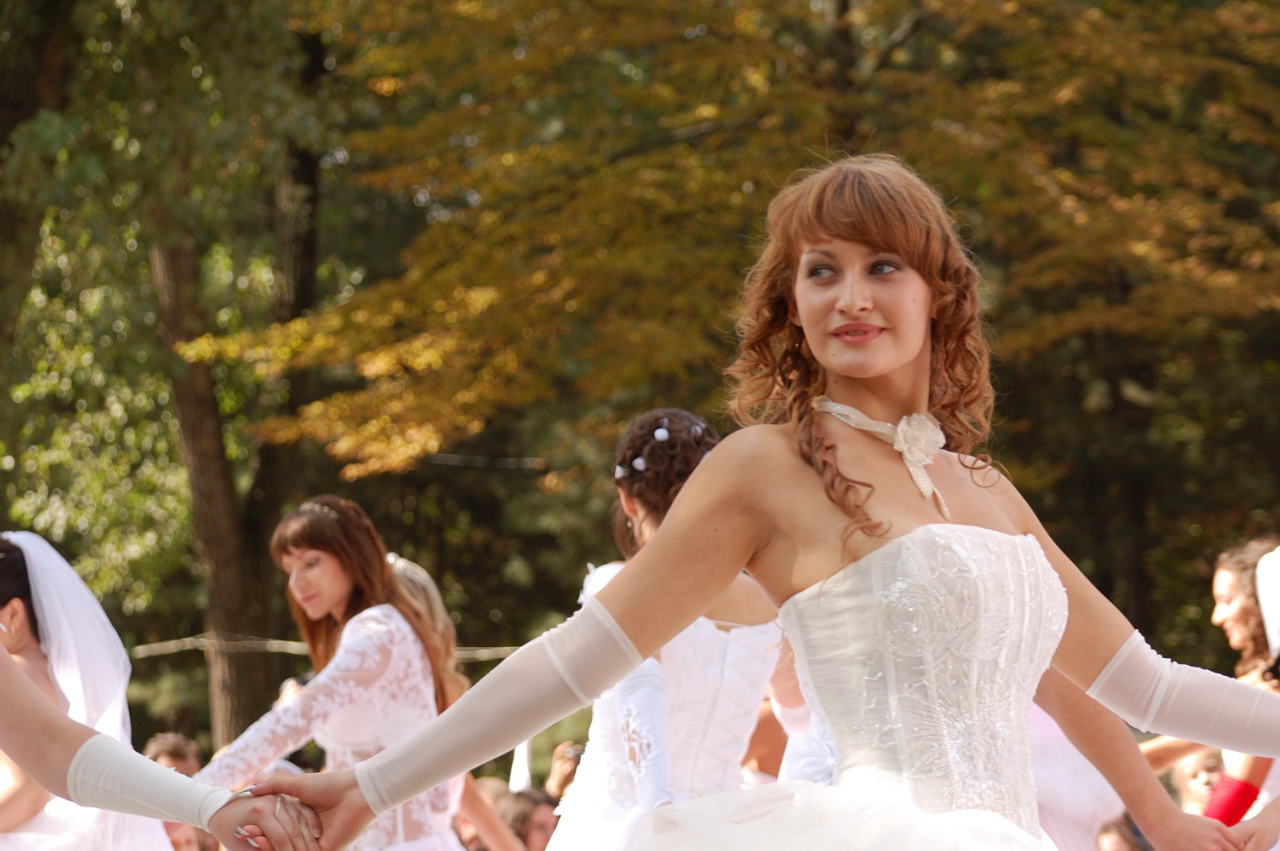 Russian traditional wedding is different from what people are used to in the United States, Canada, Mexico or Europe. There are no rehearsals, bridesmaids, and flower girls. The best man and the maid of honor are called “witnesses” or in Russian “svideteli”. The wedding celebration usually lasts for two days (or more) and requires preparation of about 1 to 6 months. The registration of marriage takes place at the department of public services or in Russian – “ZAGS”. Nowadays many couples also choose the church ceremony (source: Barynya).

1. Ransom for the bride

The groom is coming to the bride’s home with his closest friends and relatives. To get the bride he has to pay some ransom to the folks on the bride’s side. Everything is played out as a joke and both sides are mostly competing in the sense of humor. After getting the bride, the couple gets out of the house into the car (usually limousine) to go for the marriage registration. On the way from the house to the car groom and his crew also have to deal with the neighbors and kids, who all want coins, candies and free drinks. In return neighbors solute the couple and sprinkle them with coins and rice.

If the couple decides to get married in the Russian Orthodox Church, the ceremony is usually 30 to 120 minutes long with all the Russian orthodox traditions taking place. Orthodox marriage ceremony is well described in Tolstoy’s books and other classical literature. I just have to mention that the ceremony is very beautiful and is almost breathtaking both for the couple and the guests.

The civil ceremony takes place at the department of public services (“ZAGS”). At the entry to the registration hall the couple is greeted by the guests with bread and salt. Afterwards they are led by the receptionist inside the hall, where the actual ceremony is held. The ceremony is about 15 minutes long and at the end of it the couple exchanges rings, says “I do” and signs the book of registry. Then they are pronounced the man and wife and walk out of the hall to the music of Mendelssohn played by the Russian Wedding Orchestra. The civil ceremony is an official part of the wedding but the real celebration starts afterwards.

After the official part, it is customary for the bride and groom, and some of their close friends and relatives to go on a tour of the historic sites of the city, taking pictures and drinking champagne. In Moscow, popular stops include the Red Square, Grave of the Unknown Soldier and Sparrow Hills near Moscow State University. Usually by the end of the tour many guests are already singing and dancing.

But all of the above is just a prelude to the main celebration – the gala feast! Unlike wedding receptions in the West, Russian wedding receptions are very loud and they last for two days or sometimes even longer. They include a lot of Russian music, singing, dancing, long toasts, and the abundance of food and drinks to go with it. The guests love to sing Russian traditional songs to the sounds of accordion, bayan or garmoshka.

It is offered to the newlyweds by both parents as a symbol of health, prosperity and long life. Both bride and groom must take a bite of the bread and the one that takes the largest bite will be the head of the family!

At the beginning of the reception a relative or close friend makes a wedding toast to the bride and groom. By Russian tradition everyone throws their champagne glasses on the floor and it is considered a good luck if the glasses break when they hit the ground.

The groom should constantly keep his eyes on the bride. If the bride gets out of the groom’s sight, she could be stolen by his friends and the groom will have to pay the ransom.