According to a new Ipsos “Global attitudes toward gender” report, Russia emerged as the most gender-sensitive country. Russians, for instance, categorically refuse to see men doing laundry and cleaning and women working as scientists and builders. Furthermore, gender divisions are strong in Serbia and China, while the situation in Brazil, Peru, and Spain is exactly the opposite. 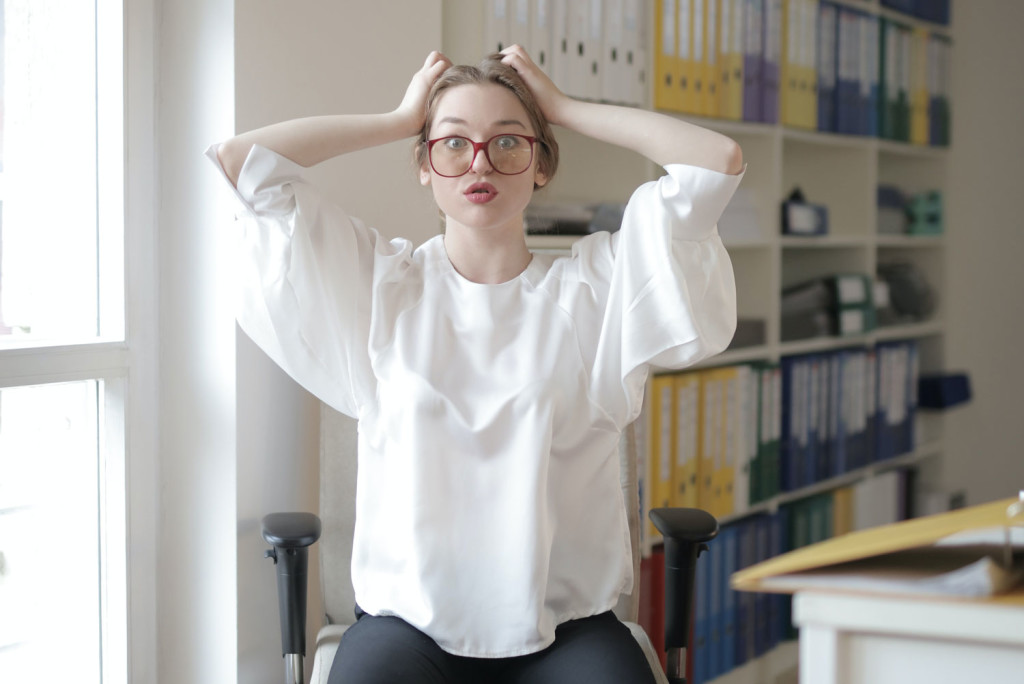 Using the online interview method, Ipsos researchers interviewed over 20,000 respondents aged 16 to 74 from 29 countries, including Russia. The survey was conducted among respondents aged 18–74 in several countries (the United States, Singapore, Canada, Turkey, and South Africa). The survey participants were asked to rate the characteristics, responsibilities, and professions in terms of belonging to the male or female sex.

Strength and leadership of Russian men

Also, much more frequently than in most other countries, Russians regard leadership as a masculine trait — only China has higher indicators. Surprisingly, men in many European countries and the United States exhibit this trait far less frequently.

Percentage of respondents who associate these characteristics with men: 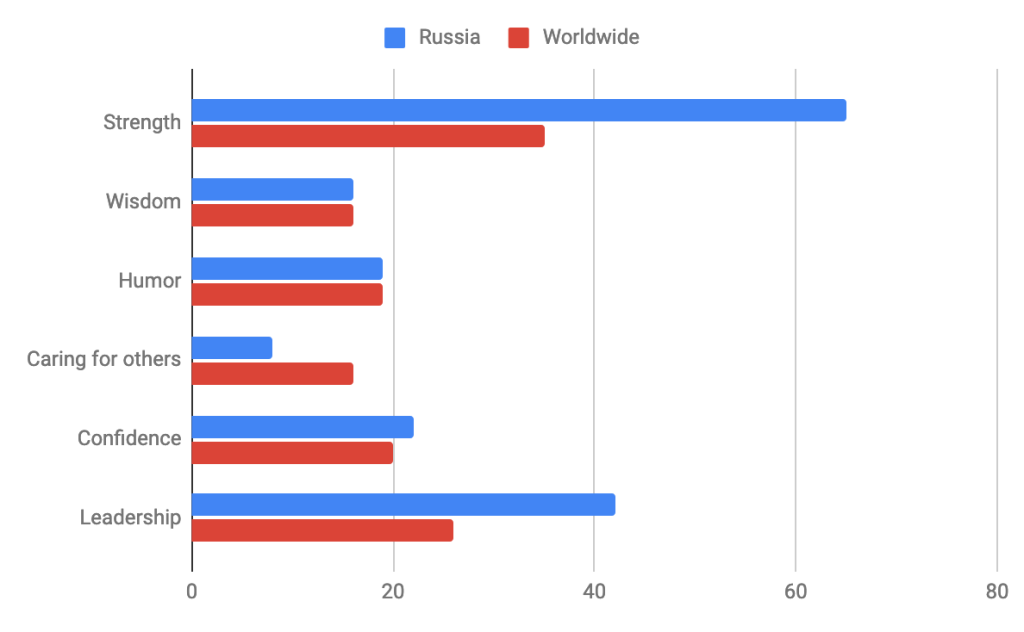 In Russia, Serbia, and Germany, women are seen as caring for others, whereas in Saudi Arabia and India, concern for others is clearly a more masculine affair. Women are almost never associated with a sense of humor (when compared to men), and only 2% of respondents in Russia and Serbia consider the sense of humor to be a feminine trait.

Wisdom suits a Russian woman better, which cannot be said for nearly all Asian women. Western Europeans hold similar beliefs (as in Russia).

Russian women’s confidence was found to be the lowest (1%) among all countries where the survey was conducted; Russians regard this characteristic as exclusively male (22%).

Percentage of respondents who associate these characteristics with women: 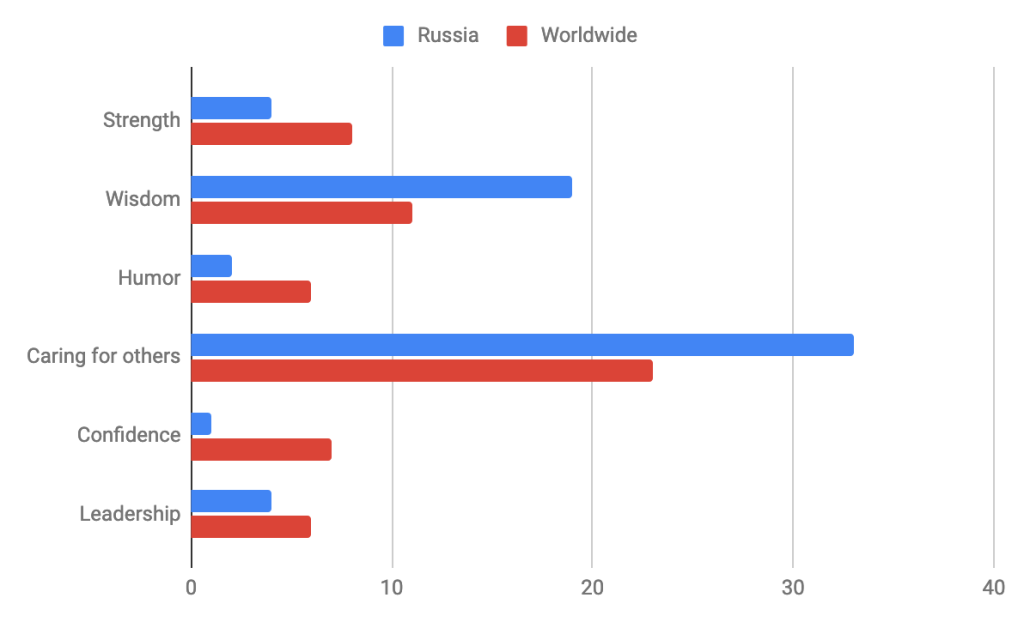 Cleaning, cooking, and washing are not men’s business.

Taking care of children, washing, cleaning, and cooking — all of these tasks are performed by men far less frequently in Russia than in other countries. Home maintenance and repairs are perceived as a male occupation by only one-third of respondents (59% in Chile, for example), and 9% of Russians believe that it is a women’s responsibility.

It is interesting to note that cleaning is more of a male prerogative in Saudi Arabia and Brazil, whereas cleaning is equally male and female in Turkey.

Percentage of respondents who believe these tasks tend to be performed more by men: 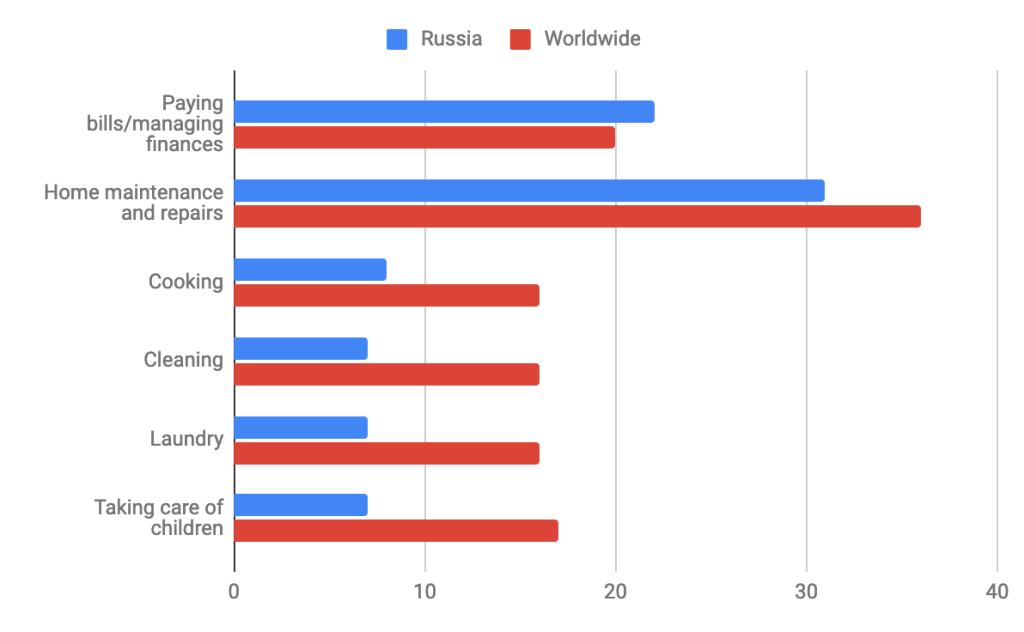 The survey’s findings revealed that in Russia, women handle nearly all household responsibilities, whereas, in other countries, attitudes are more mixed. For example, 60% of Russians are more accustomed to seeing a woman doing the laundry (only Serbia has a higher share), while in Europe, the share rarely exceeds 25%. And in Latin America and Turkey, such activities are roughly equally divided between the sexes.

Percentage of respondents who believe these tasks tend to be performed more by women: 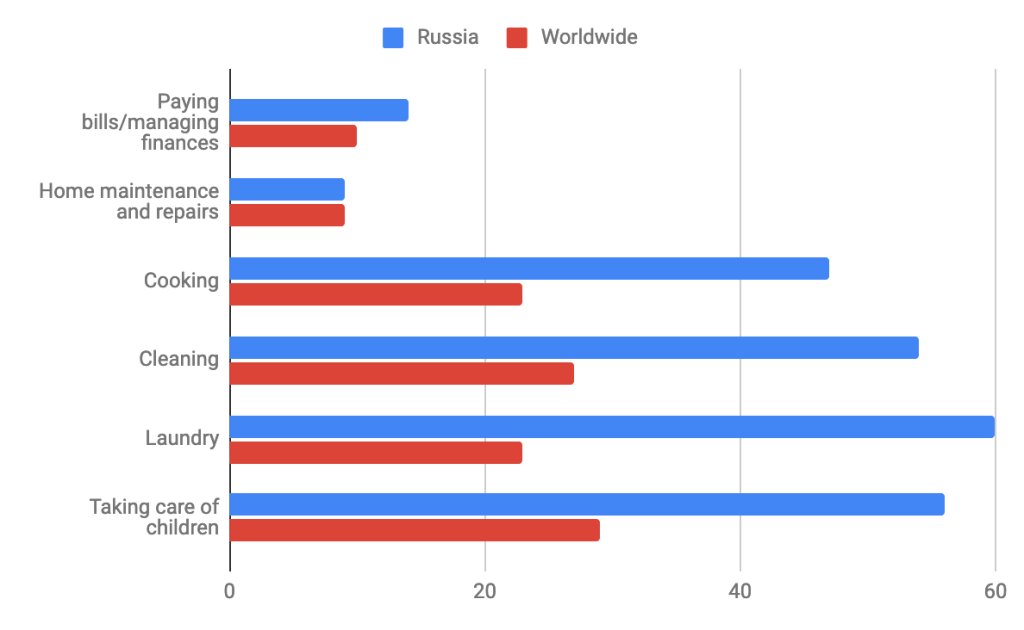 Russian man: a builder and a politician

Politicians, scientists, and information technology workers are seen as masculine professions in Russia more often (and sometimes significantly) than in other countries. Furthermore, the disparity is frequently frightening. For example, 68% of Russians consider information technology to be a male occupation, compared to only one-fourth in the United States and 37% in Serbia, which can also be considered a fairly gender-based country. A similar picture emerges when it comes to politicians, who are viewed as men by more than half of those polled in Russia, but only 17% of those polled in the Netherlands.

Percentage of respondents who consider these occupations to be held more by males: 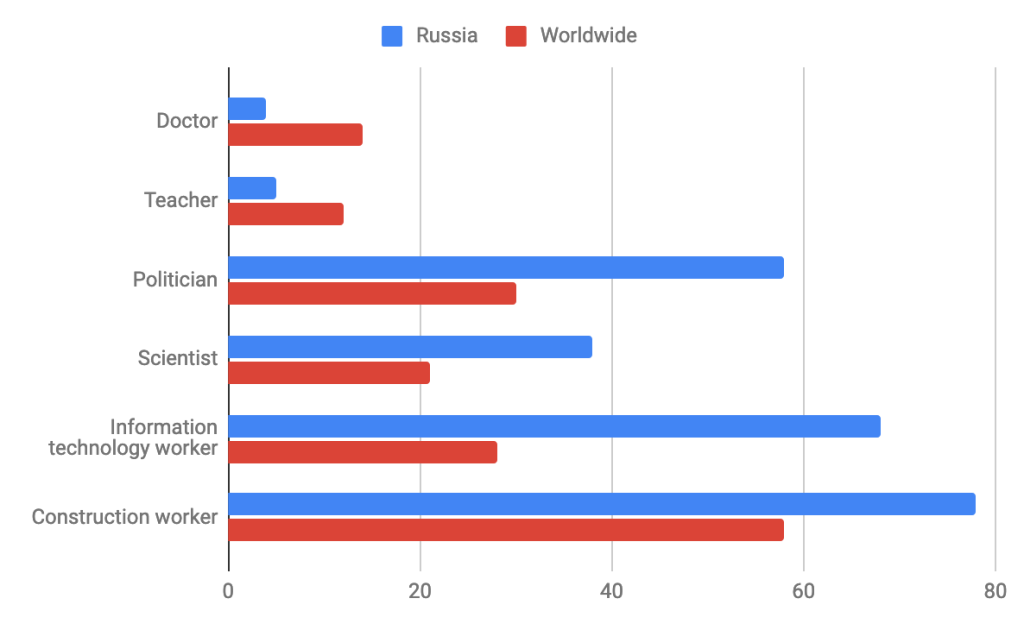 Russian woman: to teach, to teach and… to teach

Russia’s views on the gender of the teaching profession turned out to be markedly different from those of other countries. More than half (51%) of Russian respondents see this occupation as being held by a woman, whereas in Western European countries, the share is rarely higher than 20%. Male teachers are considered even more common in some countries (India, Turkey, Brazil, and Saudi Arabia).

Doctors’ occupation is frequently perceived as men’s in all countries except Russia and Serbia, and the proportion of female doctors is sometimes negligible (2% in the Netherlands and Australia and 3% in the UK).

Percentage of respondents who consider these occupations to be held more by females: 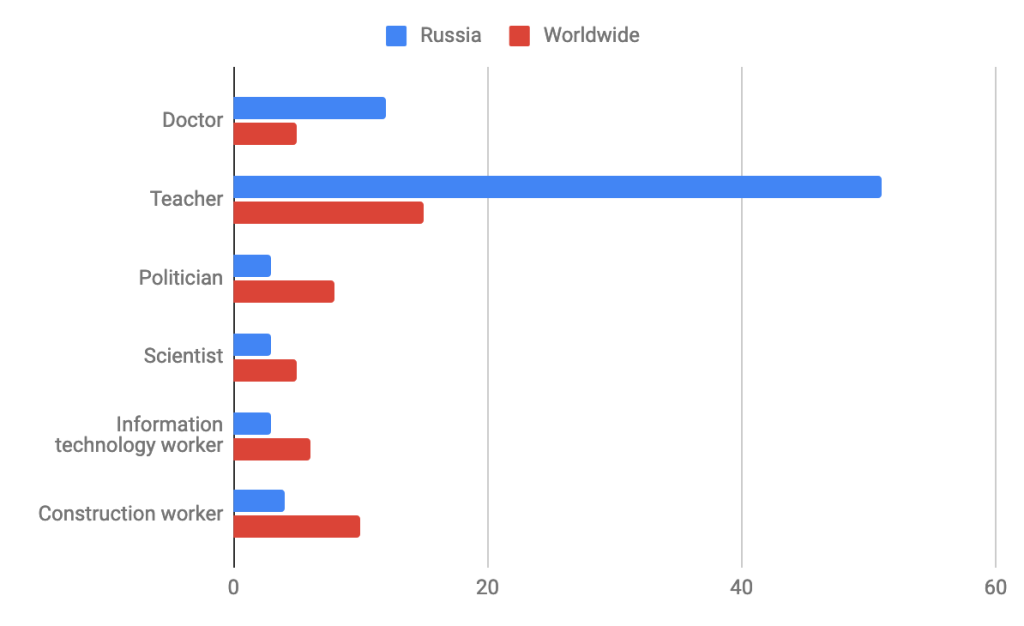